Native Apps vs Mobile Web Apps: Everything You Need to Know

When it comes to building mobile apps, there are two different approaches available to developers: Native or Mobile Web.

When it comes to building mobile apps, there are two different approaches available to developers: Native or Mobile Web. While the two may seem similar at first glance, there is a great degree of difference between the two choices. Today we’ll take a look at the key differences between each type, as well as the pros and cons of each approach.

What Exactly is a Mobile Web App?

A key benefit of mobile web apps is that they are quicker to develop than native mobile apps. Since mobile web apps use a single set of code to run on a multitude of devices, development can be concentrated on one single project. This eliminates the need to create separate versions for Android, iOS or other platforms. Mobile web apps are responsive to different browsers, screen sizes and hardware configurations, adapting to any platform the viewer is using. Due to this responsiveness, mobile web apps ensure the widest amount of users will be able to use your app. Mobile web apps also benefit in that they always run the latest version of the software released, and do not require any downloads or updates. Releasing a mobile web app can be immediate, whenever development is completed, whereas native apps require approval from each platform’s app store before they can be released. Because of this, a mobile web app is often the best way to launch a brand new app and get it to users quickly.

Because mobile web apps are not built with a specific device in mind, they often have limited access to device features such as cameras, GPS, and other system components. This can limit the capabilities of a mobile web app when compared to a native mobile app. Mobile web apps can also be more difficult for users to find since they are not available to discover in any app store.

What Exactly is a Native Mobile App?

Native mobile applications are built for a specific device or OS. Whenever you download a native mobile app from an app store, you are downloading an app that was designed specifically for that platform. While many developers offer a native app for both Android and iPhone, developing each app usually requires separate development teams to create each version. 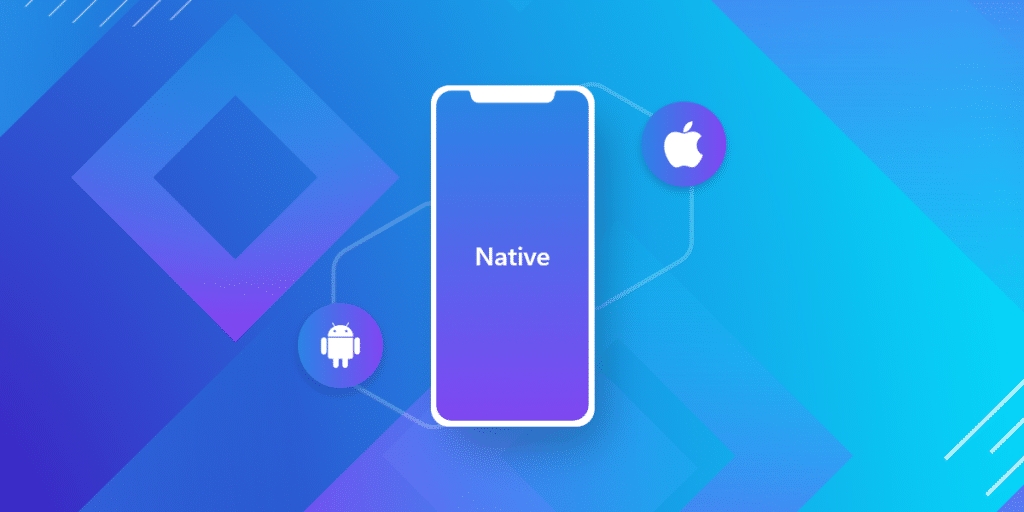 Native apps hold an advantage in that they are developed with a specific device and OS in mind and can take advantage of all the hardware features of that device. For example, native Android applications can be designed to utilize SD cards, which a mobile web app can usually not. Since a native app is downloaded onto a user’s device, developers can build offline functionality into the app. Being stored on the device also makes native apps significantly faster and more efficient than mobile web apps. Native apps can also take advantage of software development kits (SDKs) provided by Apple, Android and other manufacturers that provide tools and elements that can be used to make development easier as well as standardize the look of your app on each platform.

A primary drawback of native apps is the investment of capital and resources needed to develop different versions of your app. A decision made to develop only an iOS version of your app and not an Android version will exclude a significant number of potential users from using your app. Developing multiple versions of your app will require a different codebase which will cost time and resources that may not initially be available. Since users must download each new version of your app that is released, this can cause many users to be on different versions of the app. Lastly, native app releases must be approved by the corresponding app stores. This can be a time-consuming process, requiring a back and forth effort with each app store.

Show Me the Money! Monetizing Native Apps vs Mobile Apps

When it boils down to it, making an app is about making money, and there are different ways to get your app to do business for you. The most common way to monetize a mobile app is through on-site advertising. With a mobile web app, you can control how many ads appear on your site, without any input from an app store. You can also make your app a subscription-based service by setting up a paywall to access it. You can also advertise your mobile web app more easily with SEO and PPC marketing, making it easier to find and attract more users.

Native apps on the other hand can be monetized via download fees charged by the corresponding app store. You can set the price for downloading your app and/or require a subscription as well. Payments are typically handled by each app store, which makes it easier to handle large numbers of transactions. Be aware though that app stores will charge a small fee for processing purchases and subscriptions. In addition, native apps can make use of mobile-specific ad platforms to run advertisements on the app. However, the frequency and even the type of ad can be restricted by the app store.

No matter which method you choose, monetizing your native or mobile web app is an important part of the design process.

What are the Best Use-Cases for Native Apps vs. Mobile Apps?

Ultimately, the choice you make will boil down to what your intentions are for the app. Establishing a mobile web app is often the quickest and cheapest way to go from idea to product. Development time is less, as is the initial cost. Native apps can always be built later once your mobile web app is up and running. Mobile web apps also cast the widest net for potential users, so they are an ideal starting place for many businesses.

Native apps may be a better fit if you are building an app that requires interactivity, such as a game, or if you are building the app to serve very specific functions for your business or customers. Native mobile apps also offer greater customization and personalization options for users. They also have the benefit of being developed with offline functionality in mind. Finally, native apps can use push notifications to deliver important information and special offers to users.

Before embarking on the journey of development, it’s important to fully understand what you want users to do with your new app, your budget and timeline, your business objectives, and who your audience is. Knowing this will help guide your decision when determining whether to build a native mobile application or a mobile responsive web app. For many, both forms of application will ultimately be needed to serve the most users and reap the most rewards. At Proleadsoft, we are experts in all forms of native and mobile web app development, and we would love to help you discover the best options for making your vision come to life. Head over to our Mobile App page to learn more about our process and how we make apps come to life!

SOC 2 Security and You: What You Need to Keep in Mind!

The security of user data is paramount in today's digital world. This is especially true for companies providing software as a service (SaaS) or other cloud based services.… Continue reading

Following these tips will have you well on your way to being discovered by more and more clients, with rich content optimized for their discovery.… Continue reading

For a lot of people, SEO is a mystery. They wonder how search engines choose websites to show on top while neglecting others. For one single search query, search engines crawl about a millio… Continue reading

Let's be honest - life as we know it has changed in ways unimaginable just a few short months ago. Businesses of all kinds are being affected and they must adapt. Here are three things you c… Continue reading

5 Mistakes to Avoid with Digital Marketing in 2021

With the end of the year upon us, the time to set a course for 2021 is now. Here are 5 mistakes to avoid with your digital marketing in 2021.… Continue reading

Does Your Digital Marketing and Software Work for You?

Taking a moment to analyze your business from top to bottom can ensure your software and digital marketing efforts aren't going to waste.… Continue reading